The Immigrants' List Board of Directors cordially invite you to the:

The Michael Maggio Award honors the memory of the nationally recognized immigration attorney who was one of the founders of Immigrants' List.  Established in 2008 to honor Michael's memory, the Immigrants' List Maggio Award is conferred annually to members of Congress who evidence, by words or deeds, a firm commitment to advancing the interest of immigrants in the United States.

We are beyond excited to announce Senator Catherine Cortez Masto (NV) as IL's Maggio Award recipient for this year. Named after one of IL's founders, this award is given annually to those who have dedicated their lives to fighting for the rights of immigrants

Catherine Cortez Masto was recently elected to the United States Senate from Nevada after an extremely competitive and highly watched campaign. The granddaughter of a Mexican immigrant, she previously served as Nevada's Attorney General from 2007 to 2015 prior to being elected as the first Latina to serve in the US Senate.

As a lifelong advocate for immigrants, she now has an enormous platform to continue to fight from. In the wake of President Trump's anti-immigrant executive order released at the end of January, Senator Cortez Masto introduced her first bill in the Senate, S.415. 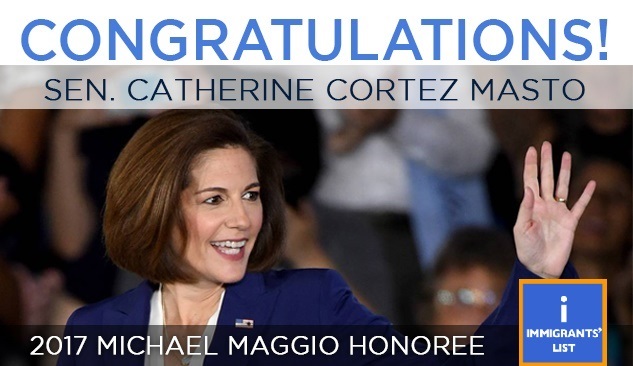 Can't join us, but wish to give in honor of our event?  Donate at http://www.immigrantslist.org/donate today!

*Partnerships and LLPs may make direct or in-kind contributions to a federal PAC of up to $5,000 per calendar year. A contribution from a partnership counts proportionally against each participating partner’s own limit, and is reported as coming from the partnership, allocated to permissible sources, such as individuals. Certain types of partners may not contribute to Immigrants’ List, such as corporations and labor unions, foreign nationals, or federal contractors.